Well, I can't believe it's been two years since I have posted on my blog. Life has just generally got in the way of that. Well, let me update. May 29, 2018 we took a job as Houseparents at The North Alabama Christian Childrens Home located in Florence, Alabama. We take care of 6 foster children in the home. We live in the home with them 24/7. It is such a rewarding job. Most of the time, it doesn't even feel like a job. Some times, it can be difficult. But, those times are few and far between. We never could have any children of our own so the setup works very well for us. The houseparents that don't work out so well, are the ones who have children of their own usually. We have made it a year next month and we can't see ourselves going anywhere for several years down the road.

I will do my best to update when I get more news. I want to take this blog in the direction of my daily life and that includes my life as a foster mom and updates on DeWayne. That will include the good and the bad.
Posted by Julie Fulmer at 12:11 PM No comments:

Most of us as a child, had a blanket or a stuffed animal that psychologists term as a "transitional object". A transitional object is something that children cling to that makes them feel safe and secure. Some people feel that it is a bridge gap between the mother and the child. My object was a Gund bear that I named Gundy. I know very original, huh? Gundy was bought by my parents when I was about 9 months old on my first trip to Walt Disney World.

I carried Gundy everywhere I went up until about the age of 10. My most memorable memory I have with Gundy was on my second trip to Walt Disney World. I was six years old. The morning we left heading home, we had been gone from the hotel for about 30 minutes. I started looking frantically in the car for Gundy. He was nowhere to be found. My dad turned the car around and we drove back to the hotel. As I am wailing in the car, my dad walks back into the hotel and speaks to the manager. They walked back to our room, which of course the linens had already been pulled out and sent to the laundry. The manager took our information and promised my dad that if he was found, he would mail Gundy to us. I was so distraught, I just knew I would never see him again. I thought Gundy would be so lonesome without me. But, what I really knew deep down was that I was lost without him. About two weeks later, who shows up in the mailbox...that's right Gundy had made his way home and was safe at last. Now, that's what I call customer service!
Posted by Julie Fulmer at 5:11 PM No comments:

Beauty and The Beast

This seems to be the most watched trailer of the week with over 127 million views. Of course, everyone watches this with memories of seeing the animated version years ago. Except me...I hate animated movies. Well, let me rephrase that I hate the animated movies after the 80's. Give me Fox and The Hound and I can watch it 2 or 3 times a day. But, I did break down and watch this trailer a couple of days ago. I actually liked it. I probably won't see it in the theatre but I see the attraction of the story now.
Posted by Julie Fulmer at 7:36 AM No comments:

I haven't posted in well over a year. Life has been hectic beyond belief. I started a new job last October. I went to work for a local consignment shop. The name of it is Frugal Frog Consignment & Boutique in Muscle Shoals, Alabama. I loved working there but my feet revolted. Saturday, October 29th was my last day there.  I have neuropathy, stress fractures, gout and arthritis. So, sometimes it's a wonder that I even get out of bed. I have discovered the Wellpatch Medicated Menthol Backache pain patches. I cut them in half and place on my feet before I go to bed. They work wonders.

My husband, DeWayne had prostate surgery in January 2016. Then, in July he had hernia surgery. So, dealing with his health issues on top of him still being on dialysis it has been a busy year so far.

Now, the holidays are creeping back up on us. So, busy time approaches again. But, now that I am not working I will have more time to devote to the blog again. See you soon!
Posted by Julie Fulmer at 8:38 AM No comments: 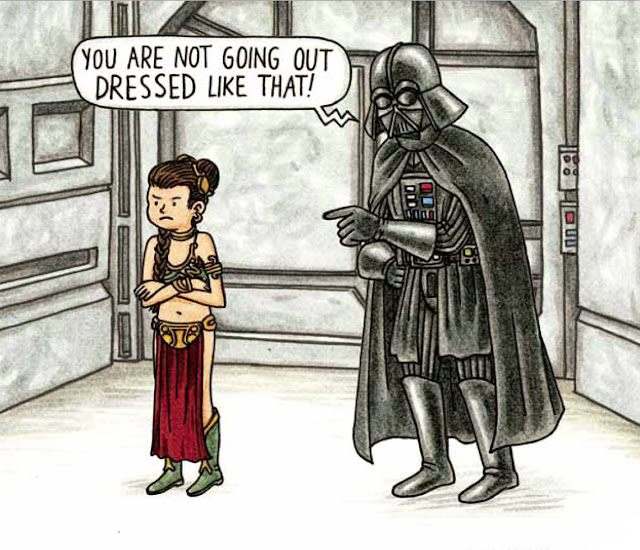 Father's Day means many things to different people. For my husband and I, it isn't a great day. Neither one of us have our fathers. Usually when you've lost a loved one, most couples have become parents themselves. So, it brings some joy back into their lives that they can celebrate the day with their kids. For those of us that never were able to celebrate the joy of parenthood, it is a hard day! But, as time passes you learn to celebrate the memories you had with your dad and make peace with it that way. Unfortunately, some never are able to make peace with the loss. 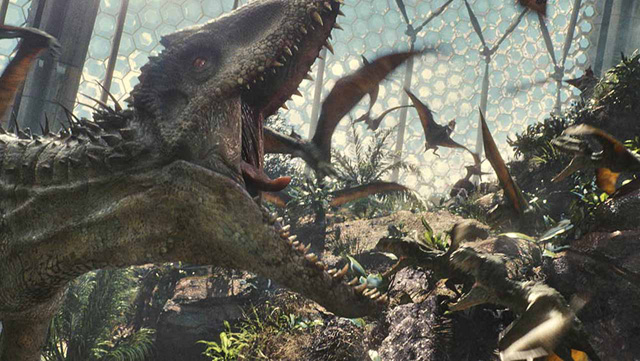 All the craze this past weekend was Jurassic World starring Chris Pratt. It grossed over 208.8 million at the North American box office this weekend. That is more than The Avengers (2012). I actually watched it at home streaming it unofficially. It was good but I don't get all the craze about it. It's just an updated version of Jurassic Park with a sub story in it that the original didn't have.  It did make me want to see the original one again. I won't give any spoilers for those who haven't seen it yet.
Posted by Julie Fulmer at 11:43 AM No comments: 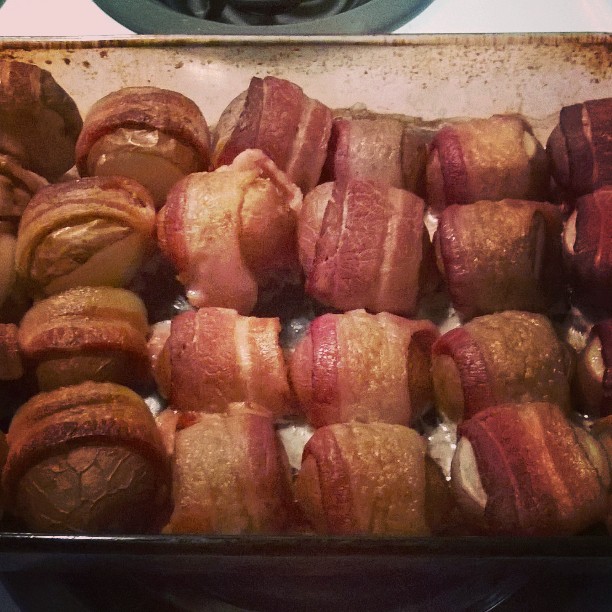 I posted this picture on Facebook but was too tired to post on the blog. So, these make it on tonight instead. These are simply Bacon Wrapped New Potatoes.